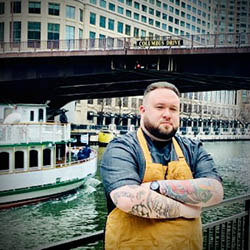 Chris got his start cooking in Michigan at Jerry's Pub on the lake. Cooking went from being a job to becoming a career when he moved to Chicago where he attended culinary school at Le Cordon Bleu. Upon graduating he worked his way up to chef at the Sedgwick Stop, and after a stint at Oyster Bah he moved over to the Blanchard as a chef de partie. Chris then found his way over to Fountainhead as sous chef and ultimately took over as executive chef at Fountainhead and Northman on the River.